Google Glass’ touchpad is OK when a verbal command might be awkward, but an audio UI becomes imperative when your hands are occupied (e.g. covered in dough while cooking, busy carrying things, or just relaxing). The Glass UI relies too heavily on the touchpad and this is, literally, painful. Tom Chi concisely explained why in his talk at “Mind the Product 2012” (http://vimeo.com/55741515, 7m18s):

[Tom describes the first test subjects trying a prototype gesture UI]
“…and about a minute and a half in I started seeing them do something weird, they were going like this [Tom rolls his shoulders and kneads them], and I was like “What’s wrong with you?” and they responded “Well my shoulder sort of hurts.” and we learned from this set of experiments that if your hands are above your heart then the blood drains back and you get exhausted from doing this in about a minute or two and you can’t go more than five. “

That’s why using Glass for more than a minute or two just isn’t practical right now; the touchpad is above your heart, yet much of the UI requires it.

Hopefully future revisions of Glass will make the entire UI available via audio.  A simple test for completeness is covering the display and then using Glass with just your voice and ears (and possibly head movements).

How does your country rank in terms of public sector corruption? Find out in Transparency International’s 2012 Corruption Perception Index. 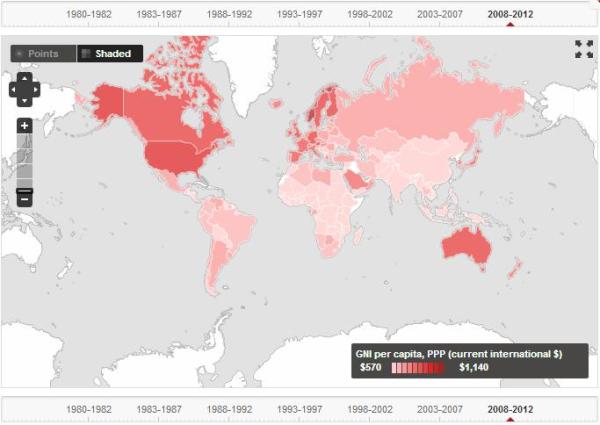 Data from World Bank
Posted in Uncategorized. Leave a Comment »

They must have misread their stars! Astrolabe, Inc., who sells astrology software, acquired the copyright to “The American Atlas” by Thomas G. Shanks and then naively decided to sue the people who maintain the standard time zone database used in software worldwide. The Daily Parker promptly provided a great write-up in October, 2011 where David asked five questions:

It’s useful to recall that government laws control time zone rules throughout the world. In the United States where the suit was filed, laws cannot be copyrighted nor can facts. That means the answer to question 1 is no, because it asks about facts (referred to as data). The actual text of the law(s) controlling time zone rules might have been copyrighted by the government that wrote them, but the facts themselves cannot be copyrighted. Since the answer to question 1 is no, the rest of the questions are rendered moot. Q.E.D.

Genetically Engineered Crops and the Farmers Who Don’t Want Them

Q: What’s the difference between patented plants and other patented things?
A: The plants can make copies of the “patented” invention on their own without help from anyone.
This is a fundamental distinction that the courts have apparently overlooked.  The crucial difference between plants and other inventions is the fact that it doesn’t require any human action to replicate the patented invention. The plant, on its own,  will copy the covered invention as it goes about its natural life. If Monsanto wants to sue someone, sue the plant; after all, it was the life-form that exercised Monsanto’s patent.

The courts should recognize that when a farmer takes no action (the copy of the patented item was made by a plant),  then the farmer is in no way at fault for winding up with a patented item on their land.  Like I said, Monsanto should sue the plant.

Plants propagate; it’s a fundamental requirement for life, and if a plant with patented genes propagates on its own, then there cannot be a finding of patent infringement.  If there is, then the lawyers and judges have lost touch with reality;  go out and garden, then come back and judge again.

If a plant “inventor” really wanted to prevent Mother Nature from going about her business and making copies, then the inventor can engineer sterility into their plants along with whatever other traits they’re trying to enhance.  Otherwise, the plants themselves, without any help from us, will go about their business and replicate across the landscape.

Jim Matheson (D) remains part of Utah’s congressional delegation after winning by the slimmest of margins in Utah’s new District 4 against Mia Love (R).  Only 768 votes, or 0.31% separated him from Ms. Love.

Nate Silver’s FiveThirtyEight blog correctly predicted the outcome of the presidential election in all 50 states and correctly called 32 of 33 senate races.  The one missed call in Montana was probably due the changing demographics that Micah Cohen wrote about earlier.

I suggested this quick javascript fix for Wikipedia’s recent, and highly annoying, tendency to send my iPhone’s web browser to the Desktop version of pages.

and today TheDJ and added it as a stopgap fix for everyone on Wikipedia!  Thank you!

(Posting an old article written in 2009 – iOS and then Android have really driven technology a long way!)

I’ve been using my Palm Prē for about a week now and thought I’d list some of the pros and cons while they are still fresh in my mind.  Caveat lector – the Prē was free in my case as an enticement to move to Sprint.  Of course, folks have explained that moving to Sprint was a big cost; but so far, it’s been allright.

The small size (about the same as a folded Razr) and curved surfaces fit the hand extremely well.